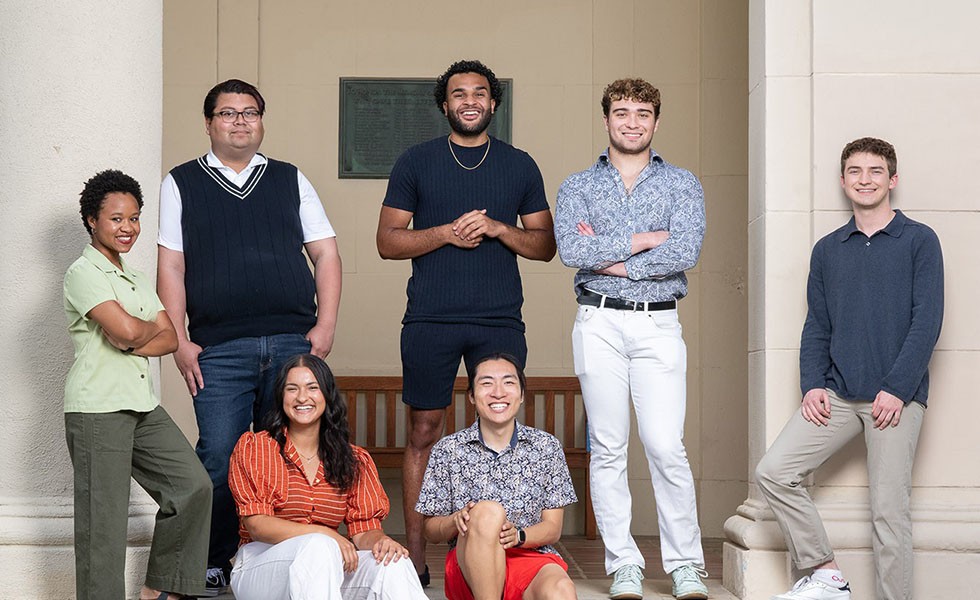 Occidental College has announced its new cohort of Barack Obama Scholars, the prestigious leadership training program that has been re-imagined to make it available to more students based on their undergraduate performance and interests.

Unchanged is the five-year-old program’s emphasis on empowering exceptional students committed to the public good, perpetuating the principles President Barack Obama ’83 has advanced throughout his life, and its focus on first-generation students, veterans, and community college transfers.

The seven 2022-23 Obama Scholars are juniors and seniors who come from across the country, include first-generation and transfer students, and represent a wide range of academic majors, from English and economics to diplomacy and world affairs and urban and environmental policy. "They truly represent the living legacy of President Obama," says Obama Scholars Advisory Council Co-Chair Hector De La Torre ’89.

“It’s the result of a thoughtful, year-long review, and we all agreed that this transition would open up the opportunity to be an Obama Scholar to any student on campus who demonstrates the abilities and desire to provide public service in whatever academic field they are in,” he says.

In line with President Obama’s stress on equal opportunity access to community organizing, “we realized we may be missing some of the best and brightest people, particularly people of color, who maybe hadn’t had access to the same advantages as their peers,” says Advisory Council Co-Chair Sara El-Amine ’07.

The re-envisioned program, open to rising juniors and seniors, also is more in line with Oxy’s Kahane United Nations and study abroad programs, which also focus on students in their third and fourth years, says El-Amine, a progressive senior strategist who was one of the architects of the Obama grassroots movement. “A program this accessible and interdisciplinary—there really is nothing like this elsewhere.”

The shift to recruiting rising juniors has enabled the program to more than double the size of each year’s cohort. Ultimately, the goal is to have a cohort of 10 new Obama Scholars each year.

During the academic year, participants are enrolled in the Obama Scholars Seminar in addition to their regular class schedule. All are mentored by Obama Scholars faculty advisors and members of the Advisory Council, a group of leaders in a variety of fields sharing a commitment to public service and the Obama Scholars program. Scholars also participate in networking and leadership development opportunities with partner organizations.

All Scholars will participate in a new, fully-funded 10-week summer program of experiential learning and leadership training. Scholars who enter as sophomores will also receive a second summer of funding for an independent internship, research project, or community service opportunity. All Scholars will receive up to $10,000 in postgraduate funding to launch their career in support of the public good.

Roughly half of the projected $15 million program endowment already has been raised, including a recent $1 million anonymous gift from long-time supporters of the program who hope to inspire others to give to the program.

Jaya Duckworth ’23 is a diplomacy and world affairs major from Seattle committed to making our education system more equitable, especially for women and girls of color. Over the last three years, she has served as an education rights legal intern for Public Counsel, a policy research and advocacy intern for the Justice for Girls Coalition for Washington State, and as a member of Oxy’s Diversity and Equity Board and Equity and Justice Committee. She plans to pursue law school or a master’s in social work after Oxy.

Deandre Ortiz ’24 is a politics major from Fitchburg, Mass. who wants to close the education gap between low-income and more affluent students. As senior intern for his state senator in Massachusetts, Deandre helped make COVID-19 vaccine distribution more accessible and equitable for low-income families and worked as a translator and advocate for Spanish-speaking constituents. Deandre has also served as the associate director and director of academic achievement for Above the Rim Training, an organization which promotes the player and character development of student athletes. He plans to attend law school and run for public office after graduation.

Zander Patent ’24 of Chicago plans to double major in politics and economics. He is committed to helping to dismantle the school-to-prison pipeline. In high school, Zander created an organization to support students struggling with mental health and addiction. At Oxy, he has served as an RA and as a summer intern for U.S. Rep. Mike Quigley (D-Ill.). He is currently Oxy’s sophomore class senator. He hopes to pursue law school and run for public office in the future.

Will Powers ’23 is a diplomacy and world affairs major from Somerset, Kentucky who is determined to improve the global crisis in primary school enrollment. In high school, Will founded a nonprofit dedicated to improving youth mental health. He has also served as the student advisor to the Kentucky Commissioner of Education, as a leader in the Kentucky Student Voice Team, as a development associate for the Greater Los Angeles Education Foundation, and as a board member for America’s Promise Alliance. Last fall, he interned at the Brookings Institution Center for Global Economy and Development, and is currently a junior class senator at Oxy. Will plans to attend graduate school and focus on researching solutions to global education inequities.

Nathan Tam ’23 is an urban and environmental policy major from San Francisco who is committed to ending violence against the AAPI community and making urban spaces and resources more accessible and equitable. Nathan is a member of Oxy’s Diversity and Equity Board and participated on the Equity and Justice Committee working to address student concerns. As an intern with the Asian Pacific Islander Forward Movement, Nathan conducted community-based research, including identifying alternatives to traditional safety options such as law enforcement for local parks. He also conducted research on the caste system and caste discrimination toward Dalits while studying in Nepal. Nathan plans to pursue a Ph.D. in social welfare and to continue his community-based research and leadership.

Kami Kafka ’23: Kami is a first-generation English major and community college transfer student from Los Angeles who wants to create equitable opportunities for low-income students. He witnessed hazardous working conditions iin a food processing factory before enrolling at East Los Angeles College and joining the John Delloro Transfer Program in Social Justice. While at ELAC, he served as an unofficial tutor and mentor, managed a food pantry, and founded a Japanese Learners’ Club before transferring to Occidental in fall 2021. Kami aspires to become an educator and mentor in the future, helping students from under-resourced backgrounds obtain excellent educational opportunities.