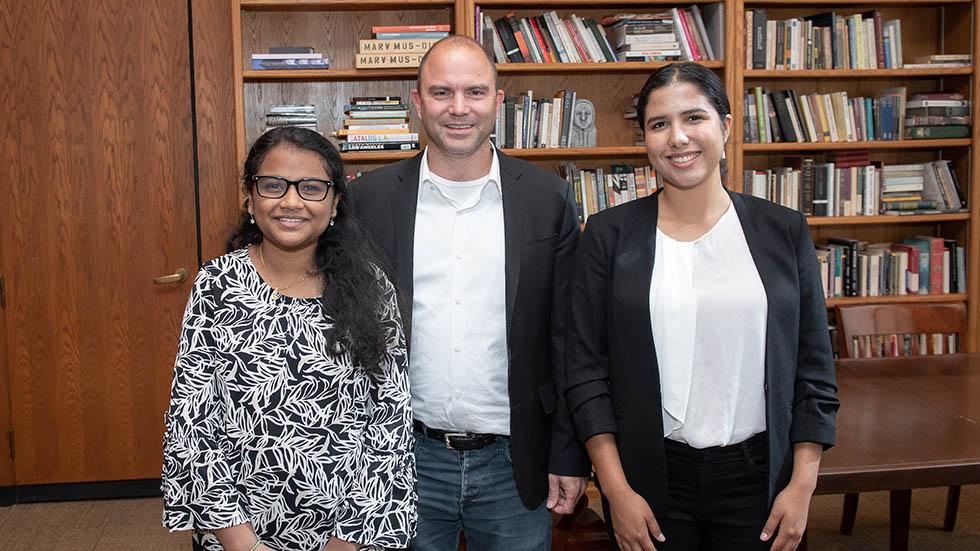 See full video of the event

“If you don’t think that’s true, I’m here to tell you what happens when an election doesn’t go the right way,” Rhodes said in response to a question from interlocutor Rob McKay ’86, former chairman of the Democracy Alliance.

“You can have best designed plans, a bunch of scholars can design the way to fight climate change, but if the president of the United States doesn’t believe climate change exists, it doesn’t matter,” said Rhodes, author of the bestselling White House memoir, The World As It Is.

Climate change is by far the greatest threat we face, he continued. “Everything we care about in the world, from migration, famine, the collapse of states, to the rise of terrorist groups, are all exacerbated by climate change. … We should be treating climate change as the organizing principle of our national security policy.”

The rise of authoritarianism is another major threat, he said. Outside of Russia and China, we have seen the alarming rise of authoritarianism in the west, with leaders such as Netanyahu in Israel, Erdogan in Turkey, Bolsonaro in Brazil, and Orban in Hungary. “The reason this matters so much is authoritarian nationalism always leads to conflict,” he said. “There is not a time in history when you had a collection of nationalist leaders in competition with each other, that that didn’t lead to a war.”

But even in the face of such challenges, never underestimate the power of effective storytelling to make a difference, said Rhodes, who abandoned his plans to be a writer and turned to politics after being an eyewitness to the destruction of the World Trade Center on 9/11.

Late in Obama’s second term, when staff cynicism was running high, the president “would always say to me, think of that girl in Laos,” Rhodes said. This was a reference to a Laotian student Rhodes met who had come to the United States to study waste management and had intended to stay until “she heard Obama talk about community organizing and giving back to the community. Then she moved back to Laos, and she was setting up a network of villages along the Mekong River, figuring out ways to ways to have clean water and sanitation.

“And he said to me, ‘If that’s the impact we had on that on that one girl, think about how many people there are like that.’ … It’s a different view of politics than just the scorecard on the policy sheet. Which is, how do you tell a story that makes people feel as if they are part of something bigger than themselves?”

Obama first felt part of something bigger as a student at Oxy, Rhodes said, a story he first heard in 2013 when the president was set to travel to South Africa to pay tribute to Nelson Mandela, who had just died.

“He said, ‘I’m going to start this speech at Occidental, and I’m going to describe how I was just this kid hanging out at my dorm, an academic underachiever, until I started to read up on Mandela and the African National Congress. It was the first time I really cared about something bigger than myself,’” Rhodes said.

“Then he went to this [anti-apartheid] rally on the steps where he had to pretend to be arrested, because he was playing the part of an ANC member, and he gave this speech and found he had a voice,” Rhodes continued. “The point is that Barack Obama would not have been president of the United States if he had not been inspired by Nelson Mandela and didn’t go to that rally at Oxy.”