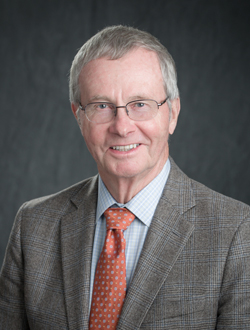 Dave Anderson ’63 has spent a lifetime working to safeguard cherished western landscapes as a pioneer in environmental and land conservation law. Anderson is the co-founder, past president and honorary trustee of the Land Trust for Santa Barbara County, which has helped preserve more than 25,000 acres of undeveloped and agricultural land. A political science major at Occidental College, Anderson earned his law degree from USC and after service in the U.S. Coast Guard became an assistant U.S. attorney, filing some of the first federal prosecutions under the Clean Water Act. He became the first person to receive a master’s degree in environmental law from Stanford University and served as the first general counsel for the California Air Resources Board. A trustee emeritus of the California Nature Conservancy and past chair of the Land Trust Alliance board of directors, Anderson also is a former board member and chair of the Santa Barbara Foundation, Santa Barbara Museum of Natural History and Santa Barbara Planning Commission. Even in retirement, he stays active: he is a board member of the Wood River Land Trust in Idaho.