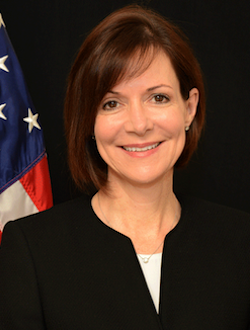 Denise Bauer served as the United States ambassador to Belgium from August 2013 until January 2017, where she focused on transatlantic security partnerships and international trade while leading one of largest embassies in Europe. She was nominated by President Barack Obama and confirmed unanimously by the U.S. Senate. Her role as a diplomat followed several successful positions in journalism, nonprofits and politics. A 1986 Occidental College graduate, Bauer’s studies focused on foreign affairs and national security. Her career began in Los Angeles, where she worked as a journalist for two leading television networks. She then held leadership positions with a number of nonprofits, including as president of the Belvedere Community Foundation. Bauer served on the Obama for America National Finance Committee during both of his presidential election campaigns and was National Finance Chair for Women for Obama in 2012. She also was on the Democratic National Committee from 2008 to 2012, where she was chair of the Women’s Leadership Forum in 2012 and co-chair of the annual National Issues Conference from 2008 to 2012.