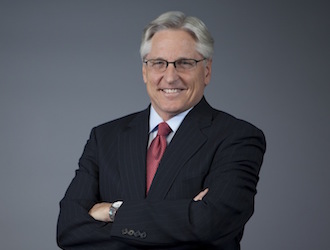 Fred DuVal ‘76 is president of the consulting firm of DuVal & Associates and senior adviser to Denton’s, the world’s largest law firm. Beginning his career under Arizona Gov. Bruce Babbitt, DuVal helped design Arizona’s Medicaid system, create the Phoenix freeway system and improve K-12 education. As a White House assistant to President Bill Clinton, DuVal guided state implementation of federal welfare reform and managed all federal-state issues. He also served as the U.S. Chief of Protocol. Returning to Arizona, he was appointed to Arizona’s State Commerce Commission, where he helped lead the state’s 10-year economic development plan. He then served as chair of the Arizona Board of Regents, where he led the effort to seamlessly blend degree offerings from all state colleges; founded the National Institute for Civil Discourse at UA; and served as a director of the University Medical Center. DuVal was the Democratic nominee for Arizona governor in 2014. He earned a degree in political science at Occidental College and a law degree from Arizona State University.