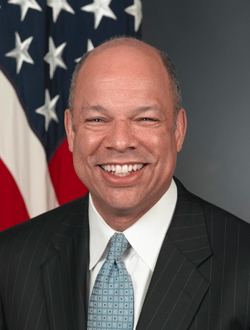 Jeh Johnson, the former U.S. secretary of Homeland Security,  is now in private law practice at Paul, Weiss, Rifkind, Wharton & Garrison, LLP in New York City. Johnson has been affiliated with Paul, Weiss on and off since 1984, and became the firm’s first African American partner in 1994. Johnson is also currently on the board of directors of PG&E Corporation, and a non-resident senior fellow at the Harvard Kennedy School.

Johnson is a fellow in the American College of Trial Lawyers and a member of the Council on Foreign Relations. He is a graduate of Morehouse College and Columbia Law School, and the recipient of nine honorary degrees.