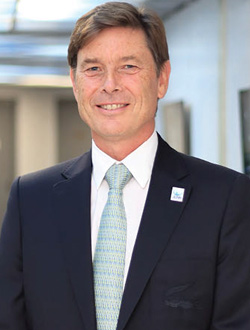 Laurent Delanney ’82’s role as assistant director of global sponsorship and partnership at Rolex is the latest chapter in his distinguished career as an international sports marketing executive. Prior to moving to Rolex in 2015, Delanney spent 21 years with ATP, the governing body of men's professional tennis. Hired as the European director of marketing, in 2009 he became CEO of ATP Europe, overseeing the governance of the 32 ATP  tournaments  in Europe, as well as ATP’s commercial director, with global responsibility for ATP sponsors. During his tenure, ATP experienced substantial increases in attendance, television viewership, social media engagement and revenue. Previously, he worked at ProServ in Paris, managing professional tennis players, including Yannick Noah. He subsequently worked at Club Med in New York City as creative director, responsible for marketing and advertising in North America. A native of France, Delanney graduated from Occidental with a degree in economics.